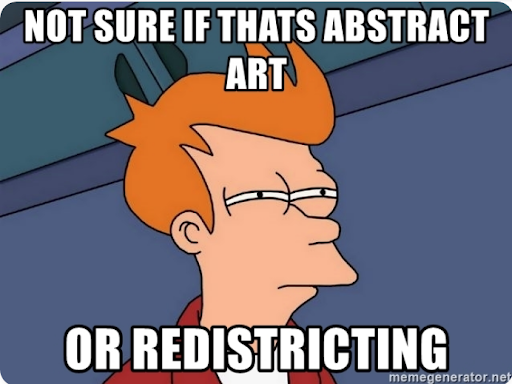 Residents are raising questions about the legality of the proposed maps which divide up Long Beach. Looking at the map of the proposed 5th District one should consult the following highlighted provisions of the California Fair Maps Act of 2019:
The council shall adopt district boundaries using the following criteria as set forth in the following order of priority:
(1) To the extent practicable, council districts shall be geographically contiguous. Areas that meet only at the points of adjoining corners are not contiguous. Areas that are separated by water and not connected by a bridge, tunnel, or regular ferry service are not contiguous.
The new 5th District is not geographically contiguous as it divides the district east and west and is separated by the Airport.
(2) To the extent practicable, the geographic integrity of any local neighborhood or local community of interest shall be respected in a manner that minimizes its division. A “community of interest” is a population that shares common social or economic interests that should be included within a single district for purposes of its effective and fair representation. Communities of interest do not include relationships with political parties, incumbents, or political candidates.
The new 5th District divides neighborhoods that have traditionally been part of one council district. For instance, the Ranchos are not divided by streets from Carson Park. The streets go north through both areas.
(3) Council district boundaries should be easily identifiable and understandable by residents. To the extent practicable, council districts shall be bounded by natural and artificial barriers, by streets, or by the boundaries of the city.
The boundaries are not understandable by residents as the district is broken up into two sections and disconnected from the other neighborhoods that they are adjacent to.
(4) To the extent practicable, and where it does not conflict with the preceding criteria in this subdivision, council districts shall be drawn to encourage geographical compactness in a manner that nearby areas of population are not bypassed in favor of more distant populations.
The proposed 5th district violates this section in as much it is not compact and bypasses areas of the existing 5th in favor of more distant populations of Bixby Knolls and Cal Heights.
(d) The council shall not adopt council district boundaries for the purpose of favoring or discriminating against a political party.
While local government is supposed to be non-partisan, the reality is that the existing 5th District is perhaps the most "Republican" by registration than other districts. Approximately 32% identify as GOP. The proposed new 5th dilutes that GOP population by merging both parts into higher Democrat registration areas.
The final map is scheduled for a vote on November 18th at the Citizens Independent Redistricting Commission meeting.
at November 17, 2021 1 comment:

Redistricting in Long Beach: GerrieMandering at Its Finest

Say Goodbye to the 5th District If You Live in the Ranchos, Plaza, Eldorado Park Estates, Imperial Estates, El Dorado Park South: GerrieMandering at Its Finest

Say goodbye to the 5th Council District if you live north of Spring and east of Studebaker. The City Independent Redistricting Commission is about to publish a map that cuts up the 5th (also referred to as E) and combines the upper part with Bixby Knolls and Cal Heights and the other parts are put into the 4th Council District along with all of El Dorado Park.

How did this happen? In November 2018, Long Beach voters approved Measure DDD, which amended the City Charter to create a commission, comprised of residents, responsible for determining the boundaries of council districts every 10 years after the national Census. The commissioners were appointed by the Mayor and City Council.

The Mayor and City Council touted this proposal to establish a redistricting commission by telling voters that it would be “independent.” In the past, the City Council actually conducted the redistricting process and, on several occasions, drew council boundaries to fit the political needs of the incumbents or political opponents. The strangest of all drawings, pulled the Nature Center from the 5th District to give it to the 4th so that the 4th district incumbent had more park area.

The current process is far from independent. When a current incumbent packed a commission meeting to protest her residence being removed from her council district, the commission changed its proposed map and put her back in. The City Charter mandates: “The Commission shall not consider place of residence of any individual, including any incumbent or political candidate, in the creation of a map.”

When several others argued that the Long Beach Airport needed to be divided among several districts, it was. Consequently, the Commission released a map that divides the 5th District north of Spring and combines it with Bixby Knolls and Cal Heights. The remainder of the district: Ranchos, Plaza, El Dorado Park Estates, Imperial Estates and El Dorado Park South are placed in the 4th District along with all of El Dorado Park.

Quick disclaimer here: this map removes the incumbent Stacy Mungo and the two announced candidates for the 2022 election: Michelle Dobson and Gerrie Schipske.

This map likely violates the City Charter that mandates: “The Commission shall number each Council district such that, for as many residents as possible, the number of the Council district they reside in remains the same.” The majority of the 5th District is being placed in the 4th District.

Redistricting is supposed to reflect the concept of “one person one vote” which requires council boundaries to adequately reflect the composition of an area so that residents who have a “community of interest” are kept in the same districts. The districts are to essentially contain the same number of residents in each.

The current redistricting process is hardly independent. The Commission is publishing its semi-final map November 10 and will then vote to finalize it on November 18.

You can attend the meetings of the Redistricting Commission online: https://longbeach.gov/redistricting.  Let them know what you think. 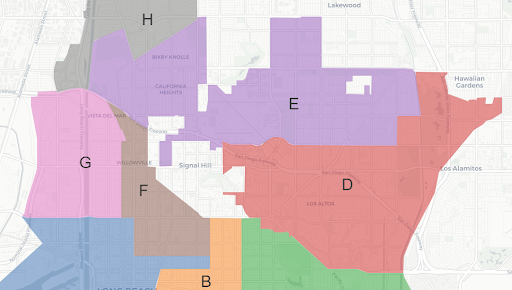 Last night, the Citizen "Independent" Redistricting Committee gave in to the complaints that 3rd Council District member, Suzie Price had been cut out of her current District because they dare proposed to remove Alamitos Heights and put it into the 4th District (D).

Although the Committee is supposed to be free of bias and political considerations, they flipped the map and put her back in the 3rd. By doing so they needed more area for the 4th Council District (D) and they went hunting for residents of the 5th Council District (E).

And so they cut the 5th District in half and connected it westward with Bixby Knolls and Cal Heights.

By doing this, they cut the following neighborhoods from the 5th: the Ranchos, the Plaza, El Dorado Park South, El Dorado Park Estates, and Imperial Estates. Oh, there is more: they cut out all of Eldorado Park and put it in the 4th (D).

Yes, folks as it stands today, I have been cut out of the 5th District but so has Stacy Mungo.

Former 5th District Councilwoman Gerrie Schipske today called upon the Mayor and City Council to advocate with the State for “Earthquake Brace and Bolt” funds for all areas of Long Beach.

“In reviewing the announcement from the State Earthquake Brace + Bolt program, which provides financial assistance for homeowners to lessen the potential for damage to their house during an earthquake, I found only two Long Beach zip codes (90802 and 90806) listed as eligible for this round of funding,” says Schipske. She is currently a candidate for the 5th Council District and previously organized Ready Long Beach, the Local Great Shake Out and Vial of Life programs to assist residents.

Schipske notes that this round of funding for the “brace and bolt” program is October 27 – December 1.

The EBB program was developed by the California Earthquake Authority (CEA) and the California Governor’s Office of Emergency Services (Cal OES) and annually announces eligible zip codes for funding. EBB offers up to $3,000 toward a code-compliant seismic retrofit for houses that qualify.

“With the growing possibility of a major earthquake hitting Southern California in the next few years, it is imperative that Long Beach residents be provided funding to earthquake retrofit their homes. Perhaps the State can use some of the tax surplus or request some of the soon to be enacted federal infrastructure funding to expand this program for all of Long Beach.”

“I am also concerned that the EBB program website fails to list the City of Long Beach ‘Permit & Building Department Information’ for residents seeking information on what is required locally. Residents should consult with the Department to find out what permits are needed for this project.”: https://www.earthquakebracebolt.com/Homeowner-Resources/Permit-Building-Department-Info https://www.longbeach.gov/lbds/building/permit-center/building-permits/

Local politics don't have to be so scary....

Email ThisBlogThis!Share to TwitterShare to FacebookShare to Pinterest
Labels: gerrie schipske for city council, long beach politics don't have to be so scary

The Silence of the Ducks 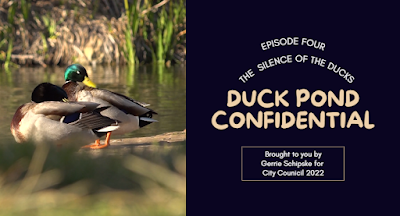 See our latest installment of "Duck Pond Confidential" as Larry finds out why the ducks will not quack. FYI: Hint -- City Council violated state law which requires them to allow people to talk via telephone or internet during a Council meeting. The Ducks are protesting in solidarity.

A review of 500 plus pages of draft council district maps to be discussed by the Independent Redistricting Commission on October 20 shows several configurations of city council districts.

Most proposals show significant changes to several of the Council districts. In all proposals, the 5th Council District -- which is referred to as District E -- stays largely intact and gets the Nature Center back in the district.

The Independent Redistricting Commission was established by Long Beach voters and is responsible for drawing the lines for all 9 council districts. Districts must be balanced for population -- meaning roughly 50,000 residents per district. When drawing council districts, the Commission is not allowed to consider current incumbents and must make every effort to keep "communities of interests" together. 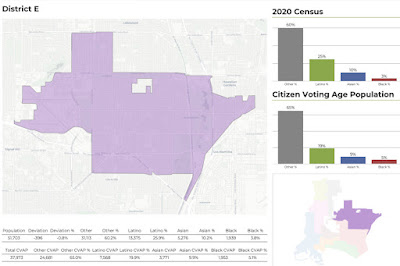 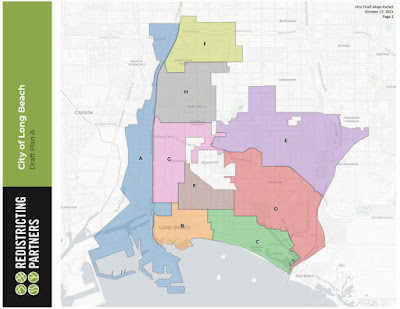 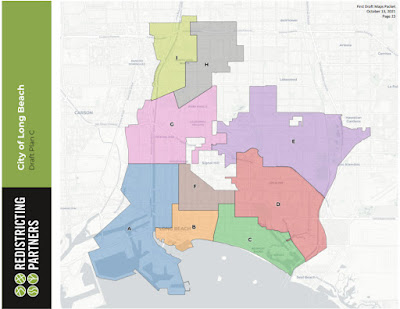 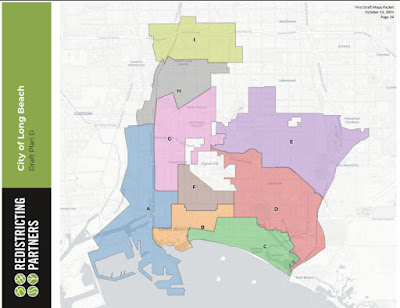 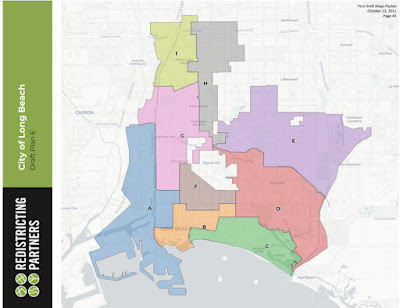 Taking Care of the 5th District

Send me a message

Things You Should Know 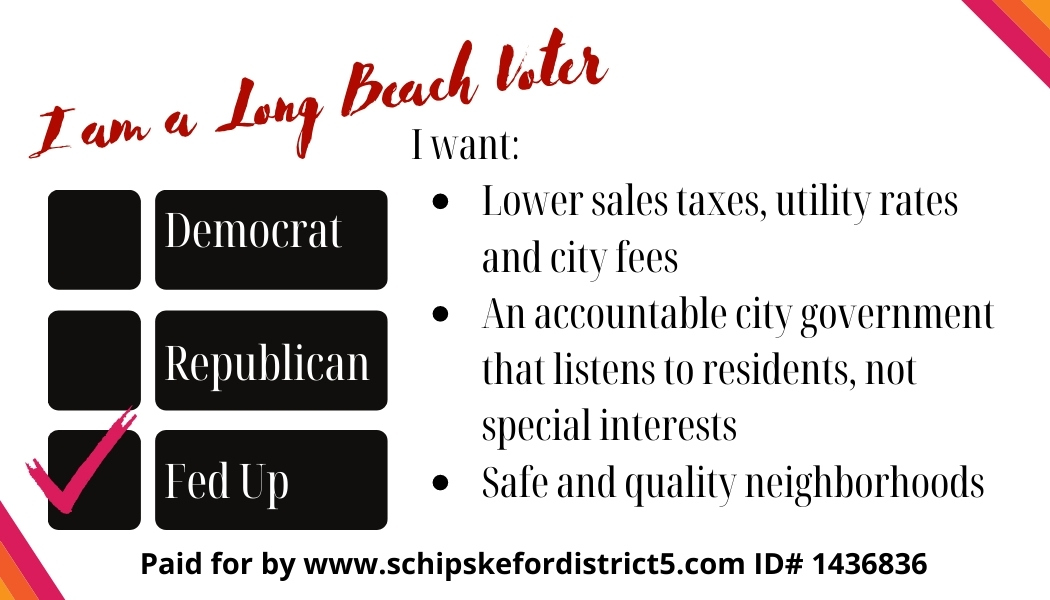